Confinement is one of the cards in Stormbound: Kingdom Wars.

Confinement is a common spell that reduces the strength of an enemy unit to a certain amount. The strength it sets it to and the mana cost of the spell can be decreased by leveling it up. Confinement works well in control decks.

Confinement is useful against single, high strength units to weaken them. 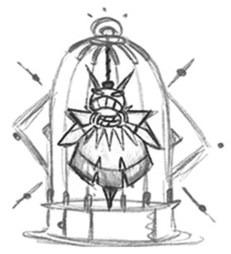 Like Harvesters of Souls, Confinement's art contains a red figure that represents a generic enemy.