Heliotroopers is a strong unit with the downside of poisoning itself. If you can play around its ability, then Heliotroopers will bring good value. 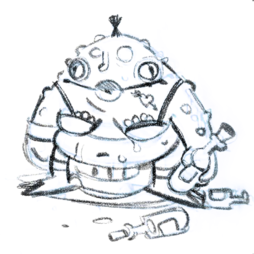 An early sketch of Heliotroopers.

Like all non-legendary Shadowfen toads, Heliotroopers is named after a color, heliotrope. Heliotrope is also a poisonous plant, which is similar to the card's ability.