Snake Eyes is one of the cards in Stormbound: Kingdom Wars.

Snake Eyes is an epic pirate unit that can replace your entire hand when played. Upgrading it will increase its strength and the number of cards drawn. Snake Eyes can fit into any deck that can make use of its hand cycling effect.

Snake Eyes' effect can be used to get rid of a useless hand and replace it with fresh options. 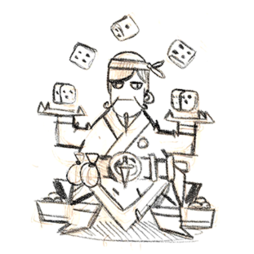 An early sketch of Snake Eyes.

Snake Eyes is one of only 2 cards, along with Harvesters of Souls, that were created based on a player's idea. The person who came up with the idea for Snake Eyes is PsychicDefective.