Voidsurgers is one of the cards in Stormbound: Kingdom Wars.

Voidsurgers is a rare frostling unit that deals high damage to nearby enemies on play, but only if it has at least 2 of them bordering it. The amount of damage it can deal can be increased by leveling it up. Voidsurgers works well in control decks.

Voidsurgers can deal lots of damage to enemies, but its specific condition makes it hard to achieve that. 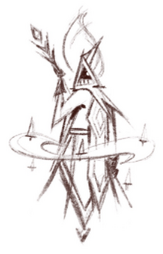